This is an ongoing project that explores long-term trends in early modern jurisprudence using metadata of the several tens of thousands of legal dissertations defended at German universities. 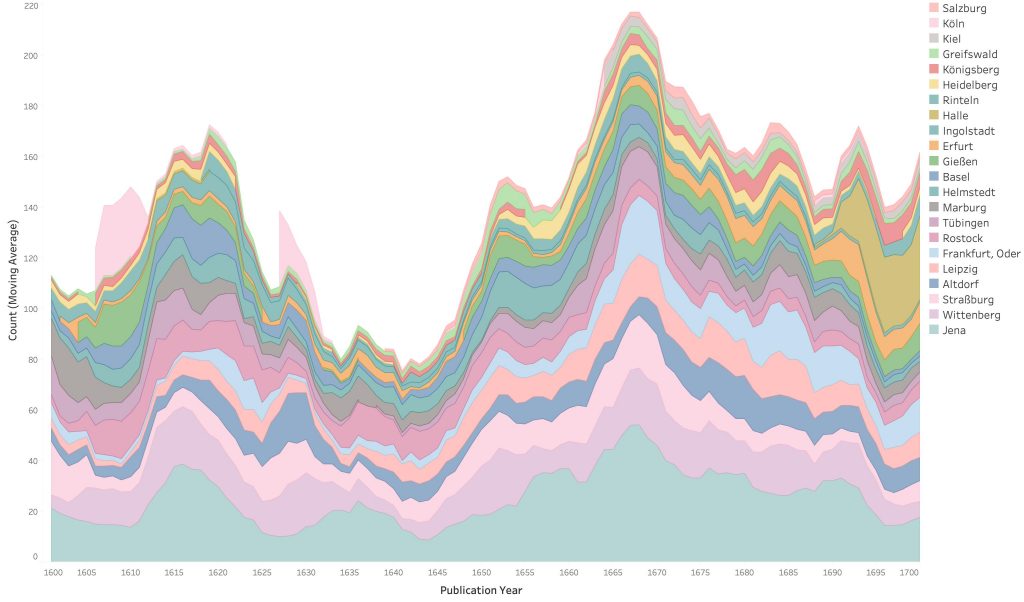 More than half of the legal dissertations of the seventeenth century were written at just a handful of Protestant universities: Jena, Wittenberg, Strasbourg, Altdorf, Leipzig, and Frankfurt on Oder. However, in the second half of the century, the largest universities lost their relative dominance. With the notable exception of Jena, the dissertations were more equally distributed among universities. The German university landscape saw of a longer trend of decentralization between the sixteenth and seventeenth century, when many Imperial Estates founded their own universities (Landesuniversitäten), many of which placed particular emphasis on jurisprudence.

Civil law subjects formed the largest cluster of dissertations (around 35 percent), including fields like the law of obligations, family law, property law, and inheritance law. However, the proportion of civil law dissertations fell by almost half in the course of the century. This decline can be observed across all principal domains of civil law, with a few notable exceptions.

Latin remained the dominant academic language in German universities well into the nineteenth century. Even vocal apologists of German as academic language like Christian Thomasius insisted on holding disputations in Latin. At the same time, the number of dissertations that included German terms (identified here through articles, prepositions, and the attribute ‘vulgo’) in their title increased markedly in the course of the seventeenth century. This suggests that vernacular language and concepts made earlier inroads into this genre than often assumed.